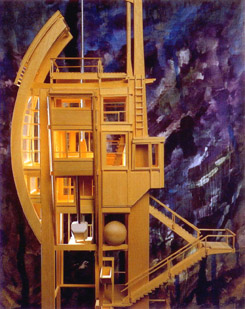 With the birth of the National Lottery in the UK came an initial array of projects competing for funding through the newly established Millennium Fund for large public projects. One of the winners was the team overseeing the replanting of the Caledonian Forest in Scotland, amongst whom were the charity and activist group Reforesting Scotland. Their primary aim was to see the reestablishment of settlements across the Highlands and a mass reforestation of the land. With this would come new innovative housing and workplaces made from Scottish and Scandinavian timber. The Forest House was one of the prototypes that Reforesting Scotland promoted.

The Forest House was designed to accommodate tree planters and scientists as a refuge, dwelling, and workplace. It would be built on glue-laminated timber posts with the lowest of its three levels some 25 metres above the ground. This height would allow the building to compete for wind, heat, and light with the tall pines typical of Scotland. The building would become the architectural equivalent of a cycle of life whereby the building would generate its own power, collect its own water, treat its own waste, and provide nutrients for a variety of food plants growing within the structure of the building. The second major benefit of building high is that it would keep the ground clear for the movement of wildlife on the forest floor.

Although the Forest House could be built within existing woodland, the hope is that it would be erected in open land with trees being planted around its base in a way that would encourage mixed species woodland and agricultural planting.