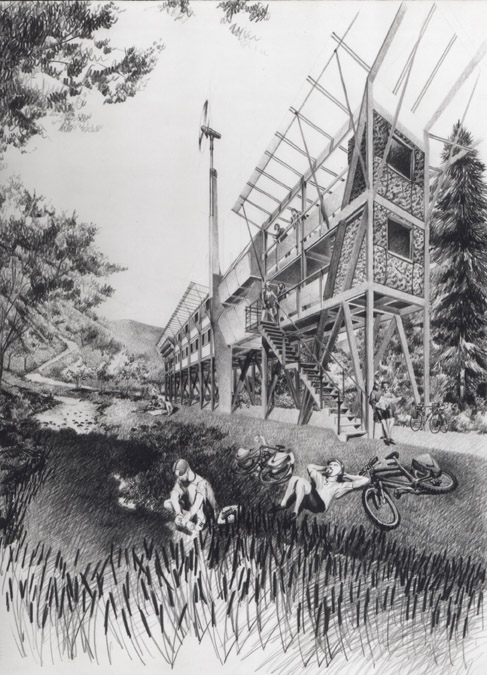 Fourth Door Research are an ideas group set up to generate and promote new thinking on current issues with a strong bias towards environmentalism, the arts - including New Media, and transport. The concept of Cyclestations arose in an attempt to enhance the growing National Cycle Network being carried out by the UK transport charity, Sustrans.

The idea is that the construction of more and more cycle and walking routes would encourage larger numbers of users, some of whom would benefit from low-cost and innovative overnight accommodation linked directly to the new routes. The Cyclestation would become part of an internet-linked network of accommodation and information points whereby tourists could find inspiring shelter, food, repairs, and information about the regions through which they were travelling. Each Cyclestation would have its own internet station and local and national database for the use of the travelling public. These systems would be interactive so that tourists could add their travelling experiences to the database.

Fourth Door Research intended that the Cyclestations would reflect the nature of the communities into which they were set. In many cases they could be located within existing converted buildings while other locations would require new purpose-built structures. In some rare places the buildings would need to be entirely self-sufficient and it is into this category that the Architecture Ensembles' prototype would fit - as a modern equivalent to an Elizabethan coaching inn.

This Cyclestation would be built of lightweight timber structural elements that would be pre-fabricated elsewhere and delivered via the cycleway to the site on load-carrying quadracycles called BROX. The timber frames would create a structural shelving unit within which would be installed prefabricated accommodation boxes. The structure would straddle the cycleway therefore eliminating land costs. Support businesses such as cycle rentals and repairs, shops, and cafes would occupy the ground area with their rental charges going towards the running and maintenance of the Cyclestation.